Our latest work project transforms the static federal wildfire danger forecast into an interactive map. We released it today:

Users can view the full country map or find their location to see burning conditions in their area, in this case Carthage, Missouri:

And it works on a smart phone or tablet:

A viz from work:

Texas experienced its worst drought on record last year. Now that the state is seeing some relief, drought conditions have consumed more than half the United States. Use this interactive map and chart to see how conditions have changed over time.

Does Washington, D.C., have more cops than other cities? That’s the question I asked myself the other day after watching a patrol car drive down our quiet, residential street. I see patrol cars everywhere — much more often than I did previous cities like Houston and Austin.

There’s a reason: Among the top 50 most-populous local governments, D.C. simply has more police officers per resident, according to the U.S. Department of Justice, which surveyed large police forces a few years ago. The city has about 670 cops per 100,000 residents, well ahead of Chicago, which was second with about 472 per 100,000. Houston had about 220, and Dallas had about 260.

Of course, D.C. is the capitol and diplomatic center of the country, and it’s densely populated with pockets of high crime and poverty. So a large officer to resident rate is understandable. But it’s a bit surprising how much D.C.’s ratio eclipses that of other major cities.

This chart shows the cities among the top 50 that have the highest per-resident officer ratio:

Here are the data for all 50 cities plotted on a map made with TileMill. Larger symbols represent higher numbers of officers per 100,000 residents:

This morning I posted a quick map illustrating my 1,100 check-ins on Foursquare during the last two years. I made it using TillMill, an open-source application for creating interactive map tiles.

This version was made in OpenHeatMap (larger symbols represent more check-ins). Clearly my Foursquare usage increased after I moved from Austin to DC last year:

Thanks to Pete Warden, who created the tool. He helped me structure my field headers so the application would recognize the geo data for each check-in. Documentation here.

I’m generally obsessed with Foursquare, the location-based service that allows users to broadcast their travels to friends. I’ve checked in more at more than 1,100 places since joining the service in February 2010, apparently more often on weekends:

But not so much in May:

And on three continents:

I just returned from the NICAR journalism convention in St. Louis, where I helped teach hands-on panels for using TileMill, the open-source mapping application. This first map we made shows the murder rate per 100,000 residents in the nation’s largest cities: 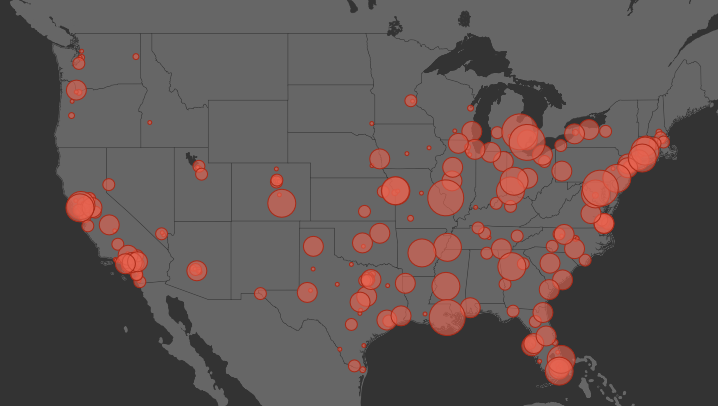 We also mapped the poverty rate: 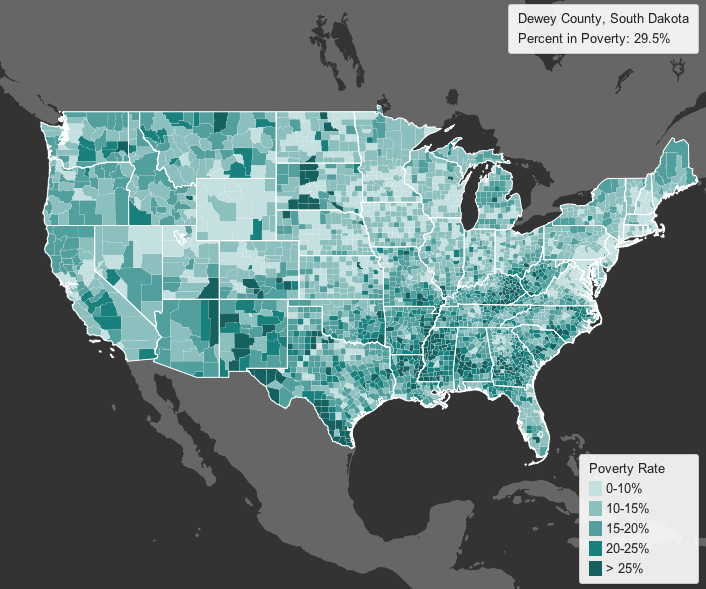 A viz from my day job:

NPR and the Center for Public Integrity have teamed up for a series of this stories this week about facilities that emit toxic chemicals. One part of the package is this interactive map, which plots more than 13,000 regulated facilities across the country — and also colors the dots based on the potential risk to people living around them:

See a larger interactive version of the map, which was created with Development Seed’s TileMill application and hosted on its MapBox service.

Some candidates are lone stars with remote galaxies of support. Others have broad universal reach. Check out the constellations of conservative support on this new interactive map:

Made with TileMill | Via Alex Yule